Jan 19: A day to reflect on Kashmiri Pandits’ unending wait for justice 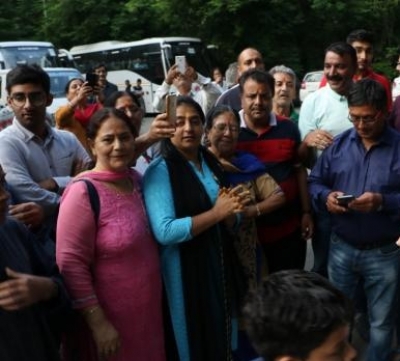 <br>The day is observed globally as the Holocaust Remembrance Day by the Kashmiri Pandit (KP) community every year, a day of mourning the loss of lives, homes, livelihoods, language, culture, Kashmir and Kashmiriyat. It is also a day to remember the failure of the administration and civil society.

Thirty-two years ago, what happened in Kashmir on the night of January 19 has been chronicled by members of the community as a period of complete horror and hostility not seen before anywhere. An entire population slept or kept its eyes and ears shut even as fanatics danced on the Valley streets and roads, roared from loudspeakers atop mosques, threatening to rape and kill the ‘kafirs’ if they failed to leave Kashmir.

There was no one to stop the mobs that had taken over everything in the Valley; none to put an end to the venomous speeches. The administration had withered away; the police had become non-functional. There was no one the minority community could turn to.

All those leaders — Farooq Abdullah, the late Mufti Mohammad Sayeed, Saifuddin Soz, Ghulam Nabi Azad, and others — who claim to be votaries of secularism, were nowhere to be seen. Farooq Abdullah was the Chief Minister of J&K in 1986-1990. Mufti Mohd Sayeed was the Union Home Minister (1989-1990). It was under their watch that terrorism flourished in Kashmir.

The maximum number of targeted killings of Kashmiri Pandits, Sikhs and all those who were seen as ‘pro-India’, brutal gang-rapes and killing of Pandit women, desecration of temples, kidnappings, attacks and harassment of the Valley’s minority were happening when the two were at the helm.

Life in the Valley had been completely overwhelmed by terrorism propagated and sponsored by Pakistan, targeting anyone who was seen to be ‘pro-India’. None of the ‘secular’ leaders dared to raise their voice against the sinister violence and the targeting of the minorities.

When warnings were pasted on the doors and walls of KP homes, open threats were published in local newspapers, messages were conveyed to targeted people to leave or die, none from the majority community, no civil society member and none of the political leaders, either in the erstwhile state or in New Delhi, stood up.

There was no human rights organisation talking about the plight of the community, which was left to perish or flee. A community that gave the country its first Prime Minister and many top bureaucrats, diplomats and intellectuals was left to fend for itself.

January 19 also exposes the hollowness of the country’s top constitutional institutions, which failed to take note of the atrocities, investigate and prosecute all those involved in the persecution and exodus of their fellow citizens.

Three decades after the mass exodus, none of the successive governments at the Centre or in the state, set up a commission or formed an SIT to probe the exodus. When over five lakh people are forced to leave their land, isn’t it the natural course of action for any government or top legal institutions to investigate the matter and punish the perpetrators?

Unfortunately, in this case, no probe has ever been ordered, no commission ever set up, and no sincere effort made to deliver justice to the persecuted.

For the past 30 years, KP community leaders have been demanding justice. But their tragic stories of killings, brutalities, torture and harassment have not moved anybody. Even their plea to declare the community ‘internally displaced’ has been continually ignored by successive governments.

In fact, in 2014, the Centre refused to grant the status of ‘Internally Displaced Persons’ to Kashmiri Pandits, despite it being the recommendation of Parliament’s Standing Committee on Home Affairs.

The closest that any organisation came to describe the plight of the community was the National Human Rights Commission (NHRC). Under the leadership of Justice M.N. Venkatachaliah, who headed the NHRC in 1996-98, the commission ruled that the “systematic ethnic cleansing” inflicted on KPs by terrorists, forcing them to exit their homeland, was akin to genocide.

In 2019, for the first time in three decades, the Centre agreed that genocide had take place in the Valley while imposing a ban on the JKLF. The then Union Home Secretary, Rajiv Gauba, had said: “JKLF chief Yasin Malik was the mastermind behind the genocide and exodus of Kashmiri Pandits.” Gauba also noted, strengthening the case against the JKLF: “Murders of Kashmiri Pandits by the JKLF in 1989 had triggered their exodus from the Valley.”

This was the closest that any government came to describing the tragedy that befell the community. Even the number of those killed and those who fled the Valley is disputed, while rape and gang-rape numbers are not even recorded. In many cases of murders, FIRs were never filed and even in those instances where cases were lodged, the movement has been a near nil.

The community says that around seven lakh KPs were forced to flee, and the number of those killed was more than 700, but no J&K administration, or the Centre, has done anything to get the actual figures.

The community leaders have been pleading for a probe to unravel the faces behind the holocaust, but successive governments have not paid any heed.

Their plight has become a stick for the Centre to beat Pakistan with; for some parties, it is an issue to whip up passions, but for the community, it is a holocaust. It is a tragedy that has not got the wheels of justice moving, reducing it to a pain that KPs have been left to endure by themselves.

(Deepika Bhan can be reached at deepika.b@ians.in)

END_OF_DOCUMENT_TOKEN_TO_BE_REPLACED

House owner in US thwarts burglary attempt in UP

Deadpool And Wolverine Fighting For A Scene In X-Men?

Mayor’s chief of staff avoids being ‘cut’ from closed meeting