Biden: “We Need More Money To Plan For The Second Pandemic. There’s Going To Be Another Pandemic.” 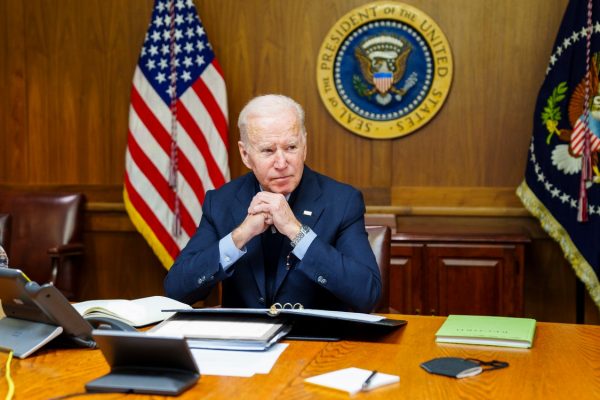 Should we be preparing for a “second pandemic” to arrive?  The man in the White House sure seems to think so.  A lot of people don’t take what Joe Biden has to say very seriously, because it is obvious that he is in an advanced state of mental decline.  But it is that lack of mental sharpness that causes him to slip up and reveal things that those around Biden do not want him to reveal.  That is one of the reasons why Biden is kept away from reporters most of the time, but once in a while there is a brief opportunity for reporters to directly interact with him.  We witnessed one of those brief opportunities this week, and the way that Biden responded to one reporter’s question has a lot of people scratching their heads…

“How much of the supply of vaccines for these small children is there and how many of the nation’s kids will you be able to get vaccinated before you need more money from Congress?” a reporter asked.

If Biden was simply trying to say that it is inevitable that another pandemic will eventually come along someday, that would not be that big of a deal, because that is just common sense.

But what he actually said seems to infer much more than that.

He was suggesting that more money would be needed while he is in the White House in order to prepare for “the second pandemic”.  So that would seem to indicate that he believes that another one is coming very soon.

And of course there have been many pandemics throughout history, but by using the term “second pandemic” he is clearly pairing the next one that is coming with the COVID pandemic.

So when Biden says that there is going to be “another pandemic”, he is not talking about something that will take place 20 or 30 years from now.

So what does he know?

Other News:   La Salle County Board: 4 GOP contests to be settled Tuesday

This is a very rare instance in which I actually agree with Biden.  I have been strongly warning that another pandemic is coming, and I have explained exactly why I believe that.

Obviously Biden does not believe what I believe.

So what information has led him to the conclusion that there will definitely be another pandemic?

Does he believe that monkeypox will develop into such a crisis?

On Tuesday, Fox News reported that the total number of confirmed cases in the United States has now risen to 113…

The monkeypox virus has spread to 20 U.S. states and the nation’s capital.

Thus far, 113 infections have been reported, with the majority in California, New York, Illinois and Florida.

The monkeypox sample was taken in Jersey City, according to the city’s official social media account, and processed at a public health laboratory.

It will be sent to the US Centers for Disease Control and Prevention for confirmation.

The case will bring the total number of confirmed cases across America to 114 in 22 states, including the District of Colombia.

Needless to say, there are other parts of the world that are being hit much harder.

In areas of Africa where monkeypox is endemic, there have been more than 1,500 confirmed cases so far this year, and 72 of those victims have died.

In the rest of the world where monkeypox is not endemic at this stage, there are 3,126 confirmed cases and 120 suspected cases.

The number of confirmed cases continues to grow at an exponential rate, and the United Kingdom continues to lead the way.

As I write this article, there are 793 confirmed cases in the UK, and the vast majority of them are men that have sex with other men…

To date, more than 99% of monkeypox cases in Britain are among men, and the majority of those are in men who are gay, bisexual or who have sex with men. Scientists warn that anyone who is in close, physical contact with someone infected with monkeypox or their clothing or bedsheets is at risk of the disease, regardless of their sexual orientation.

In a desperate attempt to stop this outbreak from exploding, health officials in the UK are going to start giving vaccines to men from the gay community…

British health officials will start offering vaccines to some men who have sex with men and are at the highest risk of catching monkeypox, in an effort to curb the biggest outbreak of the disease beyond Africa.

Doctors can consider vaccination for some men at the highest risk of exposure, Britain’s Health Security agency said in a statement Tuesday. The agency identified those at highest risk as men who have sex with men and who have multiple partners, participate in group sex or attend venues where sex occurs on the premises.

Of course nobody knows if those vaccines will actually be effective.  As I have covered previously, the new strain that is going around has approximately 40 mutations that differentiate it from previous strains.

Other News:   Philly woman will need ‘new face’ after being set alight in brutal attack

There is still so much that we do not know, and on Thursday officials at the WHO are scheduled to get together to discuss what to do next…

The World Health Organization (WHO) has confirmed that a meeting will take place on Thursday to determine whether monkeypox is an emergency of international concern.

Ultimately, it is going to take far more than a few thousand cases to turn this into the same sort of global crisis that we faced with COVID.

However, as I noted earlier, the number of confirmed cases has been rising at an exponential rate.

If that continues to happen, and if the number of confirmed cases just keeps doubling, it won’t be too long before we have a real nightmare on our hands.

We will just have to wait and see what happens.

But whether monkeypox becomes a true global pandemic or not, there is one thing that Joe Biden and I fully agree on.

Another pandemic is definitely coming, and we won’t have to wait too long before it is here.

***It is finally here! Michael’s new book entitled “7 Year Apocalypse” is now available in paperback and for the Kindle on Amazon.***

Other News:   Rwanda to Germany: Canada to elevate small Commonwealth nations’ concerns at the G7

About the Author: My name is Michael and my brand new book entitled “7 Year Apocalypse” is now available on Amazon.com.  In addition to my new book I have written five other books that are available on Amazon.com including  “Lost Prophecies Of The Future Of America”, “The Beginning Of The End”, “Get Prepared Now”, and “Living A Life That Really Matters”. (#CommissionsEarned)  When you purchase any of these books you help to support the work that I am doing, and one way that you can really help is by sending digital copies as gifts through Amazon to family and friends.  Time is short, and I need help getting these warnings into the hands of as many people as possible.  I have published thousands of articles on The Economic Collapse Blog, End Of The American Dream and The Most Important News, and the articles that I publish on those sites are republished on dozens of other prominent websites all over the globe.  I always freely and happily allow others to republish my articles on their own websites, but I also ask that they include this “About the Author” section with each article.  The material contained in this article is for general information purposes only, and readers should consult licensed professionals before making any legal, business, financial or health decisions.  I encourage you to follow me on social media on Facebook and Twitter, and any way that you can share these articles with others is a great help.  These are such troubled times, and people need hope.  John 3:16 tells us about the hope that God has given us through Jesus Christ: “For God so loved the world, that he gave his only begotten Son, that whosoever believeth in him should not perish, but have everlasting life.”  If you have not already done so, I strongly urge you to ask Jesus to be your Lord and Savior today.

The post Biden: “We Need More Money To Plan For The Second Pandemic. There’s Going To Be Another Pandemic.” appeared first on End Of The American Dream.

Published in Commentary and Latest News