Ken Clodfelter held up a 10-inch freshwater fish for the kids to touch and Maci Manning of Dalzell hesitantly extended her fingers – and then immediately pulled them away, wiping the digits against her shorts.

That put a smile on Clodfelter’s face. The retired Department of Natural Resources fish biologist was among the volunteers who came Saturday to Baker Lake in Peru to teach children how to fish – and the necessary first step is to show them it’s OK to handle one.

“The fish are slimy and they may jump a little bit,” Clodfelter said, “but it doesn’t take very long for (the kids) to get used to it.”

The annual Kids Fishing Expo returned Saturday after a two-year hiatus and word of its return appears to have circulated slowly because organizers variously characterized the turnout as good not great. Two hundred pre-prepared gift packs were given away; but most onlookers said Saturday’s event was less well-attended than in years past. 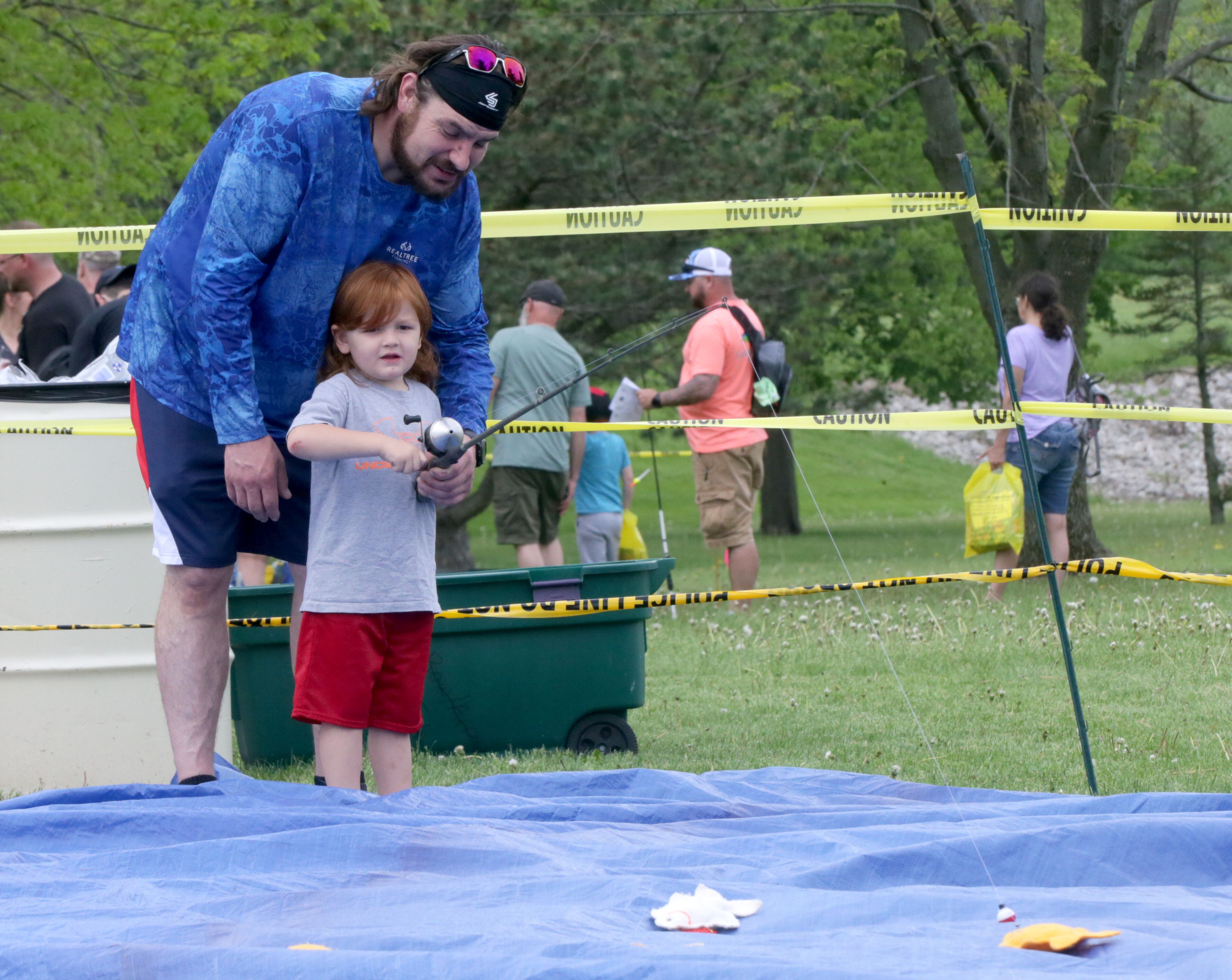 Jamison Niebjelski and his father Beau practice casting during the 22nd annual Kids Fishing Expo on Saturday, May 14, 2022, at Baker Lake in Peru. (Scott Anderson/)

But then fishing as a whole declined during the pandemic, at least in Clodfelter’s estimation.

“Some of these lakes can get fairly busy, so maybe some people stayed away,” Clodfelter said, recalling the strictest infection controls. “But you could find a spot to go fishing on a lake if you wanted to.”

The young fishermen might not have been biting Saturday, so to speak, but Beth Welbers said there was no difficulty finding afishionados – er, aficionados – to step in with little notice and to teach kids how to tie fishing line and cast a reel.

“We did an incredible turnout as far as volunteers at the last minute,” said Welbers, a lead organizer. “The event has gone on for (more than) 20 years now, so it’s kind of an institution. I’ve talked to other fishing clubs and they do not do anything comparable.”

One of the original volunteers needed no persuasion to return. Fred Reutner of Mendota was stationed at a table teaching the kids one of the least sought-after techniques: How to clean a fish. A deep fryer was perched nearby to impart another lesson – that fried fish tastes good. No carping, there.

Reutner said he agreed to volunteer because constructive hobbies, such as fishing, go a long way to keeping children positively involved and steering them away from drugs.

“I started fishing when I was 4 years old,” said Reutner, who still remembers the first bluegill he reeled in. “I used a cane pole. That’s all we had.”

And even if turnout was low, Clodfelter pointed out the expo nonetheless presented a rare opportunity to teach children lessons about the ecology and environmental stewardship.

“They’re just a sponge at this age,” he said. “Whatever you tell them, chances are I may not remember it, but they’ll remember it.” Oh, yuck! Maci Manning, of Dalzell (right), grimaces as Ken Clodfelter, retired fish biologist with the Illinois Department of Natural Resources, teaches her and (from right) brother Jexton and Damien Bezely about several kinds of fish during the 22nd annual Kids Fishing Expo on Saturday, May 14, 2022, at Baker Lake in Peru. (Scott Anderson/)