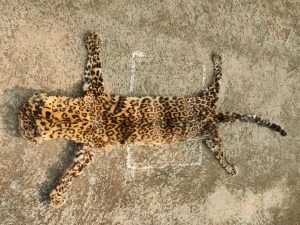 Deogarh: One person was arrested in Deogarh district after one leopard skin, an elephant tusk and pangolin scales of over one kilogram were recovered from his possession, police said.

Acting on a tip-off, a team of special task force personnel conducted a search operation in an area near Telibani on Thursday and apprehended the person, a senior officer said.

“The man was arrested on the charge of trading of wild animals’ body parts and handed over to Deogarh forest officials for legal action,” he said.

The seized leopard skin, elephant tusk and pangolin scales will be sent to Wild Life Institute of India, Deharadun in Uttarakhand for chemical examination.

Other News:   Tesla Opens A New Showroom in Xinjiang

Further investigation is underway, he said.

Since 2020, the STF has seized skin of 25 leopards, 13 elephant tusks, skin of seven deer, nine pangolins, and more than 16 kg of pangolin scales and arrested 55 people for allegedly being involved in wildlife trade.