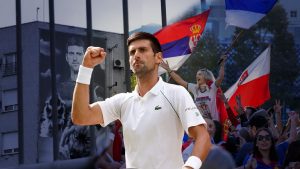 Melbourne: World No. 1 tennis player Novak Djokovic’s hopes of defending his Australian Open crown rest on the outcome of the hearing Sunday morning, which will reportedly be conducted by three judges.

Reports suggested on Saturday that the Serbian player’s case being heard by three judges, instead of one, was a big victory for his legal team, even as the winner of 20 Grand Slam titles will spend a fifth night in the city’s detention hotel.

Other News:   Check out the latest on Fairfield roads

If the defending Australian Open champion gets a reprieve on Sunday, he will be playing his opening-round match against fellow Serbian Miomir Kecmanovic on Monday.

Djokovic had his visa cancelled for a second time, by Immigration Minister Alex Hawke on Friday, who exercised his powers to cancel the Serb’s document on the ground that his presence in the country might incite anti-vaccination sentiment.

Djokovic, who is an anti-vaccine advocate, first had his visa cancelled upon his arrival in Australia on January 5, which was issued to him on the basis of medical exemption granted to him by Tennis Australia and Victoria State government.

Other News:   Manchin, Sinema Tell Democrats Where They Can Stick There Extremist Agenda

A report in The West Australian on Saturday said that Djokovic was driven from his lawyer’s office to the Park Hotel in Melbourne’s Carlton, “which is being used as an immigration detention centre, on Saturday afternoon. Wearing a green tracksuit and a white face mask, he appeared composed in the back of a vehicle.”

Serbian President Aleksandar Vucic has been critical with the treatment meted out to Djokovic — the country’s top athlete –, saying it amounted to harassment and maltreatment by the Australian authorities.

Australian Prime Minister Scott Morrison, however, has insisted that the player’s visa cancellation was carried out in public interest.