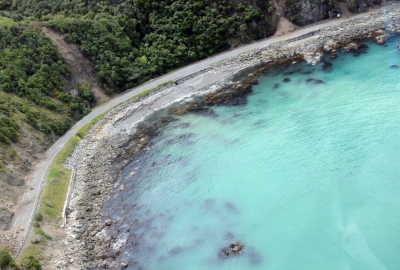 New Zealand’s coastal areas on the north and east coast of the North Island and the Chatham Islands are expected to experience “strong and unusual currents and unpredictable surges at the shore”, it said in a statement.

This is the largest eruption from the Tonga volcano so far, and the eruption is ongoing, Xinhua news agency quoted the statement as saying.

“Strong currents and surges can injure and drown people. There is a danger to swimmers, surfers, people fishing, small boats and anyone in or near the water close to shore,” it added.

People in or near the sea are advised to move out of the water, off beaches and shore areas and away from harbours, rivers and estuaries until at least early Sunday morning.

On Saturday afternoon, Tonga issued another tsunami warning after massive waves have hit the main island of Tongatapu, including capital city Nuku’alofa.

The volcano has erupted continuously since Friday morning, raising the plume to altitude 5-20 km above sea level.

The tsunami warning was cancelled for Tongatapu, Ha’apai and southern Tonga on Saturday morning because the observation data recorded from the tide gauge at Nuku’alofa indicated that the state of the sea level was back to normal.

All domestic flights in Tonga were cancelled on Saturday due to the active volcano.

Meanwhile, in Fiji, the Mineral Resources Department has advised the public, especially those in low lying coastal areas to stay out of the water and away from the shore due to strong currents and dangerous waves.

The department said tsunami waves from these volcanic eruptions were in effect along the entire Fiji coastline.

The volcano is part of the highly active Tonga-Kermadec Islands volcanic arc, a subduction zone extending from New Zealand north-northeast to Fiji.