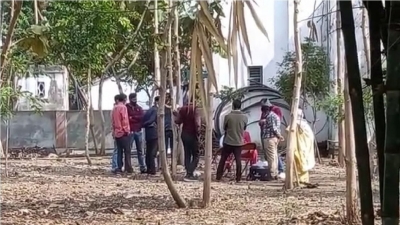 Wardha (Maharashtra), Jan 15 (IANS) The police have recovered one more skull of an infant, allegedly aborted at the Kadam Hospital in Arvi town, and raids were carried out at several places, officials said here on Saturday.

The case, which has shaken the citizens’ collective conscience, first came to light after the Wardha Police arrested a lady medico, Dr Rekha N. Kadam, a nurse, and two others following the secret abortion performed on a 13-year-old girl there on January 4.

Interrogation of the accused and investigations led the police to discover a veritable ‘grave-yard’ of aborted foetuses or unwanted babies, found in the biogas plant of the hospital compound, stunning the people. (IANS – Jan 15).

Other News:   Did the vaccine cure the stroke patient? – Physicians request for examination

In the ongoing digging work by a team of police officials, another skull of an aborted infant has been recovered, taking the total recoveries to 12 skulls and 54 other bones, all unidentified, besides bloodstained clothes and other evidence.

All the recoveries have been sent for forensic analysis to Nagpur, the reports of which are awaited, and further digging is being undertaken in the vicinity.

Simultaneously, raids were carried out at the hospital and the home of the prime accused and police have seized several files, medical records and reports and other evidence.

Other News:   lululemon athletica inc. Updates Revenue and Earnings Expectations for the Fourth Quarter Ahead of the ICR Conference

Police had also detained another relative of the prime accused (Dr Rekha Kadam) in connection with the probe, a lady senior citizen, but she suddenly took ill and was hospitalised.

Investigators and locals say that the hospital had earned a dubious reputation for “all types of abortions” for nearly four decades and people came here from all over Wardha and adjoining districts.

Prominent leaders including Shiv Sena’s Kishore Tiwari – accorded a MoS status – and Pune-based ‘Beti Bachao’ proponent Dr Ganesh Rakh have demanded a “thorough probe” into the medical racket, preferably by a SIT, to unravel the true ramifications like female infanticide on the sly besides illegal abortion, and punish all those found guilty.

Other News:   The Australian Open is much more important than any one player: Nadal on Djokovic

As the probe progresses, the possible role or involvement of some persons in the local health department is expected to come under the scanner for their alleged lapses owing to which the illegalities thrived at the hospital for long, violating the provisions of the stringent Pre-Conception & Pre-Natal Diagnostic Techniques (PCPNDTA) Act, 1994.